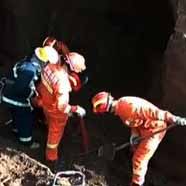 The incident happened near Baoji, a city in northwestern China’s Shaanxi province, where construction workers had found a rusted sword and a metal pot the day before. The local government’s cultural relic management institute said it suspected that the artifacts came from a grave dating back to the Tang dynasty, which ended in A.D. 907. The construction company informed the authorities and sent guards to keep watch over the site.

The news attracted much attention from nearby residents. After the guards ended their shift at around 9 p.m., the three grave robbers apparently made their move.

The next day, workers discovered one partially buried body at the construction site. The province’s fire department later announced on its Weibo microblog that it had found the bodies of three grave robbers who had died during the night after soil had collapsed on them.

By law, all historical artifacts buried in the ground belong to the Chinese government. But a lucrative black market for antiques has fueled widespread theft of such relics. Earlier this year, 70 people were arrested for digging up treasures worth some 300 million yuan ($43 million) from a riverbed where ships had sunk in a 17th century battle. On Thursday, a Qing dynasty-era mural was reported stolen from a temple in northern China.

Grave robbing has even given rise to its own genre of movies, TV shows, and novels, prompting a commentary in party newspaper People’s Daily earlier this year warning against painting too pretty a picture about the phenomenon. “Certainly there is no justification for turning thieves into idols,” it said.