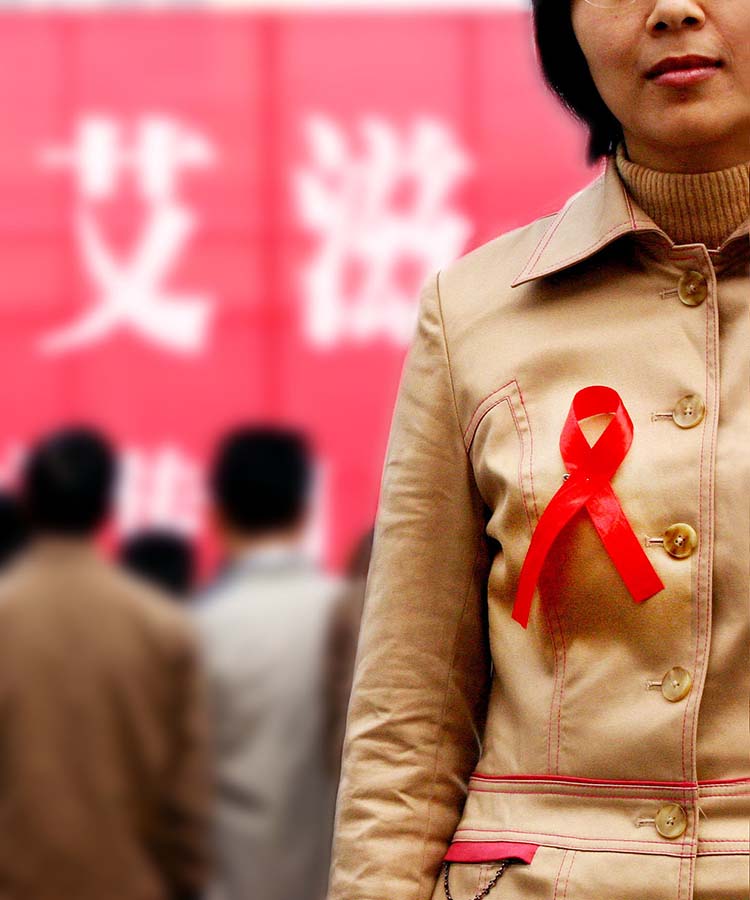 One afternoon in the fall of 2016, Meizi took me for a stroll along the streets of Ruili, a small city on China’s border with Myanmar. Meizi was a core member of a local HIV support group and a key informant for my dissertation research. She also became something of a friend, one who helped me navigate life in this remote part of China. (To protect the names of my research participants, I have given them all pseudonyms.)

Partway through our walk, a middle-aged man came over and struck up a conversation with Meizi. The pair updated each other on their lives before she introduced him to me as a fellow longtime HIV support group volunteer.

Meizi had once joked that, “Nearly everyone you see walking around in Ruili is HIV-positive.” That’s an exaggeration, but this part of southwest China, once a hub of the cross-border heroin trade, is home to thousands of people living with HIV. The man she was introducing me to was more unique than most, however. “You know how you keep saying that they initially found 146 positive HIV cases here?” Meizi asked. “Well, he was one of them.”

In 1989, a year after the World Health Organization commemorated the first-ever World AIDS Day, a drug rehab center in Ruili tested its patients for the virus. One hundred and forty-six of the tests came back positive. It was China’s first recorded major HIV outbreak.

Almost three decades later, the man, who according to Meizi had once gone to Beijing and met national leaders to discuss the HIV/AIDS crisis, still seemed embarrassed about his condition. Nevertheless, our conversation filled me with hope. His story is that of so many other individuals living with HIV I met in Ruili: Despite the blow of their diagnosis and the stigma attached to HIV, they have managed to rebuild their lives and livelihoods and form new communities for support and care.

China’s southwestern border regions were hit hard by the country’s HIV/AIDS crisis. After border controls were relaxed in the 1980s, heroin imported from northern Myanmar spread quickly throughout the region — and with it, HIV.

Ruili was portrayed nationally and even globally as an ‘epicenter’ of HIV in China, and locals began to live in collective fear of the virus.
- Fang Hongxin, anthropologist

Between 1989 and 2009, more than 4,500 people tested positive for HIV in Ruili, according to official statistics; more than 1,150 died. The real number may be much higher, as prior to 2004 many deaths of AIDS were not recorded.

At the time, awareness of HIV in this region was low. As late as the 1990s, Ruili’s epidemic management and prevention measures were limited to a handful of programs and drug rehab centers. The local government focused its energies on economic development and social stability, while the pain and emotional distress caused by the outbreak, especially among rural lower- and middle-class families, went largely overlooked.

By the end of the 1990s, however, the HIV epidemic had become a major focus for international donors and organizers. International HIV-related programs arrived in Ruili around 2000. The Chinese government also began paying more attention to the HIV epidemic around this time. In 2003, it rolled out the “Four Frees and One Care” policy, which promised free drugs, counseling, testing, and schooling to several key populations, as well as care and economic assistance to households affected by HIV.

Official government-level attention can be a double-edged sword, however. Although it injected significant resources into projects aimed at managing HIV, it also spread stigmas related to HIV/AIDS. Ruili was portrayed nationally and even globally as an “epicenter” of HIV in China, and locals began to live in collective fear of the virus.

In the 2000s, Ruili began carrying out “widescale screening,” with the state-sanctioned aim of “finding all HIV” cases, resulting in a surge in HIV diagnoses. Based on the accounts of HIV-positive people, these new diagnoses amounted to a permanent black mark on their lives. Government officials branded carriers a “high-risk population” and worked to segregate them from the rest of society. Locals discriminated against and avoided HIV carriers. Unsurprisingly, given the situation, many individuals living with HIV refused to cooperate with public health officials, which made it hard for the local government and international programs to treat and monitor cases and bring the epidemic under control.

It was the appearance of HIV peer groups that helped break the deadlock.

Although in many Western countries, people with HIV had been quick to form associations to carry out social action, oppose negative stereotypes surrounding HIV, and spread public awareness of treatment methods, similar groups were slow to emerge in the Chinese countryside. Cards with wishes made by the members of an HIV peer group. Courtesy of Fang Hongxin

That they did so at all in a place like Ruili is testament to the work of Qi Fang, a pioneer behind numerous local NGO projects, and Li Fu, managing principal at the Ruili Center for Disease Control’s AIDS center, who helped promote the formation and expansion of peer groups in the region.

Faced with such a large outbreak in the countryside, Qi and Li thought that groups composed of HIV-positive people from rural backgrounds could help patients come to terms with their diagnoses. Soon, with the support of several cross-regional NGOs, including AIDS Care China, Save the Children, and Oxfam, peer groups began to form both in Ruili proper and the surrounding countryside.

At the heart of these early peer groups was the “coming out” performance. For example, when the HIV-positive husband of Yingle, who was also HIV-positive, died, she began to believe that she would soon follow him to the grave. Caiyun, one of the earliest peer group founders in Ruili, helped pull her back from the ledge, in part by being willing to talk about her own diagnosis.

They shared their experiences with one another, and Caiyun gave Yingle information about medication options, encouraging her to keep living. Yingle was so moved by Caiyun’s message that she also joined a peer group, so that she might help other people living with HIV.

Today, Ruili is often held up as a model area for managing HIV/AIDS in China, but its success was not just about increased access to medication or the region’s investment in monitoring, treatment, control, and care for HIV-positive people. Equally important were the changes in HIV-positive people’s attitudes and ways of life — changes made possible by the work of peer groups.

These groups represent a novel kind of social force where members are bonded together through a common biological reality. Apart from physical assistance, the compassion members offer helps people living with HIV as they adjust their family lives and find new means of supporting themselves post-diagnosis.

“Society must be defended.” As Michel Foucault noted, that is so often the mindset behind standardized top-down governance and securitization of health. If there’s a lesson to be learned from Ruili, it’s that offering the subjects of this governance sufficient space to operate independently can help make society healthier, more open, and more vibrant for all.

Dec. 1 is World AIDS Day. For more of Sixth Tone’s coverage on this issue, click here.