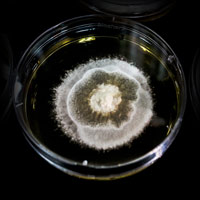 YUNNAN, Southwest China — If you’re looking for a new species of fungus, says Peter Mortimer, there are few better places than southwest China’s Yunnan province. The South African mycologist has been researching Yunnan’s fungi for more than 10 years at the Kunming Institute of Botany.

Some of that fungi could help solve the earth’s plastic and rubber waste problem, Mortimer says.

“Yunnan has a great variety of landscapes and climates in a small space, from lowland tropical forests in the south to high-altitude alpine north. Yunnan is also very mountainous and mountains are a varied landscape with different forest and soil types, creating a great diversity of fungal habitats,” says Mortimer.

But the 6,000 species of fungi already discovered in Yunnan “probably account for a tiny percentage of the total species in the province,” says Mortimer. Scientists estimate that Yunnan has almost 100,000 species that are still unknown.

Worldwide, scientists have identified about 140,000 species of fungus, Mortimer says.

Last year, Mortimer, together with Samantha Karunarathna at Yunnan’s Qujing Normal University, discovered some new species with a pretty remarkable talent: the ability to digest both plastic and latex, natural rubber made from tree sap. The fungi could lead to new green technologies for recycling plastic and rubber waste. Peter Mortimer holds a new species of mushroom during a fungi-collecting expedition in the Mekong region, Yunnan province. Courtesy of Peter Mortimer

Mortimer had a hunch that the province’s tropical southern zone might harbor rubber-eating fungi.

“We were in rubber plantations in Xishuangbanna looking for fungi. There was an old discarded plastic bag in the bushes, and there were fungi growing on it and digesting it,” says Mortimer.

Out of the species found on the plastic bag, four were new to science.

“We find a lot of new species. But to find, on one plastic bag, four new species unrelated to each other, all of which are able to break down plastic — that’s a good find!”

And then the fungi served up another surprise. All four could also digest latex in the laboratory. Fungi that can digest plastics have been known for many years, but “as far as my knowledge goes, this is the first finding of fungi breaking down latex. And, finding dual-purpose fungi that can break down both latex and plastic — this is definitely a first!” says Mortimer.

Latex, or natural rubber, is a widely used material, outperforming synthetic rubber in many applications, including tires.

For the ultimate solution, in a bioreactor, we need a cocktail of such fungi, with different enzymes to digest different plastics.
- Peter Mortimer

By eating plastic or rubber, fungi transform it into biomass — more fungus. “It looks like white cotton wool, smells like a damp forest,” says Mortimer. It can then be used for fertilizer, animal feed, building materials, biofoams and packaging.

Mortimer and his team fed their fungi a range of different plastics. “Polyurethane — PU — was the most susceptible to biodegradation, and so that is what we focused on.”

The world is choking with plastic waste: almost 300 million tons are produced every year. Polyurethane-based plastics, used to make foams, fibers, and tires, accounts for 8 million tons. Polyurethane is resistant to degradation and hard to recycle: 90% of it ends up in landfills. When reprocessed, polyurethane also releases polluting chemicals that are hazardous to health.

Species of fungi that can digest polyurethane in the laboratory have been known for almost 20 years, and the practical applications of plastic-eating fungi for the polyurethane waste problem have been discussed for over a decade.

Recycling experts say that fungal techniques, if successful, could replace costly and fairly dirty recycling processes with something akin to composting. “Biological recycling has proven to be the most economical method for waste and wastewater management,” said Nicole Pei, a waste management engineer. “Currently plastics either go to landfill or undergo a thermal-based treatment, and thermal-based treatments for plastics containing chlorine are likely to generate dioxin, and using fuel to generate enough heat is costly.” Pei is the founder of Cair Technologies, a Hong Kong company that provides biological systems that control gas emissions from wastewater treatment.

But the fungi that have so far been found cannot digest plastic fast enough. Can Yunnan’s fungi be different?

Mortimer emphasizes that his research has only just begun, but says that the results have already shown promise — the species found on a plastic bag in Xishuangbanna are voracious PU eaters.

“I am excited — these four new species are aggressive in colonizing PU, showing a very high rate of degradation,” says Mortimer.

Their latex-eating potential of the same fungi, however, still needs to be assessed: “We are at very early stages. In the lab, these species of fungi gain nutrition from latex, but we have not tested the rates of mass loss and degradation of latex.” What enables fungi to eat indigestible materials like plastic? Mortimer explains that fungi possess specialized enzymes that no other organisms have. These enzymes can break the strong bonds within chemical compounds, like lignin and cellulose — both of which are indigestible to the vast majority of living organisms. This ability allows some fungi to digest wood.

Mortimer explains that fungi have not just one such enzyme, but “an arsenal of them; an enzyme cocktail that allows fungi to adapt to and benefit from different environments.”

One question that Mortimer is now trying to answer is whether the ability to break down plastic and latex is an accident of nature or the result of evolution.

An enzyme that evolved to break down wood may, by chance, also be able to slice up molecules such as polyurethane, he explains. Alternatively, plastic and latex-eating may be the result of fungi’s evolution to exploit the resources of our polluted world.

Mortimer is now looking at fungi’s plastic and latex-slicing enzymes and the genes that code for them. If these are different, then “the abilities have been evolved independently by different fungi, showing you that fungi are adapting to the environment.”

“This is ongoing research. We also found a host of other fungi living directly on rubber latex on plantations, but have not formally characterized and sequenced those fungi yet,” adds Mortimer. If the right fungus exists, it's probably in Yunnan

To recycle on an industrial scale, the plastic and latex eating that Mortimer observes in a petri dish must be scaled up to a bioreactor. “It sounds like a huge, impressive thing, but a bioreactor is not much more than a steel tank where you maintain perfect conditions to keep the fungus happy.”

Bioreactors are simple, but they can be expensive to run and to build, says Mortimer. He is now applying for funding.

“Next step, we get the bioreactors up and running. We will try to calculate different degradation at different volumes of plastic and fungi, and try different growing conditions to see what makes fungi happiest. In a year or two we will have our own bioreactors to test this,” says Mortimer.

Mortimer then plans to patent methods for breaking down plastic with fungi in bioreactors. He already has one patent for the first species of plastic-eating fungus of the Aspergillus genus that his group found in Yunnan.

READ MORE: For Artist Long Pan, the Mushroom Is the Message

“In 2022, we patented, at the petri dish level, the processes of preparing plastic, exposing it to some form of treatment — such as UV to help degrade it first and then having the fungus grow on it.”

“New species are showing to be more effective, and at the bioreactor level, there will be different patents because of the different growing conditions,” explains Mortimer.

“Each fungal species, or cocktail of species, can be a separate patent,” adds Mortimer. “Also, as we venture into different plastics, a range of patents would follow.” The fungi his team found show initial promise, but the search for more fungi goes on. Mortimer says that for industrial fungi-based plastic recycling to be commercially viable, the fungi used must be “chilled out” and have “the right chemical arsenal.”

“Chilled-out” means that they are not picky about their conditions in the bioreactor: “They must be comfortable in a general environment where you don’t have huge energy costs to keep the temperature high or low, maintaining specific oxygen and carbon dioxide levels.”

The “chemical arsenal” refers to enzymes — Mortimer also hopes to find fungi that can also break down tougher plastics.

“The fungus needs to have the weaponry, the enzymes to break down not just PU, because with PU we are competing against a very large recycling industry. But if we start breaking down more resistant plastics like polyvinyl, then we can really stand out.”

It is a matter of time that fungi with the right chemical arsenals are going to present themselves. Statistically, there is a very good chance they are here in Yunnan.
- Peter Mortimer

For this reason, Mortimer says that scientists will need more than one species of “chilled out” fungi: “For the ultimate solution, in a bioreactor, we need a cocktail of such fungi, with different enzymes to digest different plastics.”

“Looking far into the future, I can also see a spray made from fungal enzymes that can be sprayed onto the plastics,” he adds.

Mortimer explains that fungi may also provide a way to recycle fused plastics that are unrecyclable using existing methods: “Conventional recycling does not work for things like spandex built into your jeans and Tetra Packs with aluminum lining inside. Potentially, a fungus could grow into such waste and selectively digest the different components in those fused systems.”

Can fungi live up to this potential and provide a solution to green plastic waste recycling? Yes, if we find the right fungi, says Mortimer.

And he thinks that we will: “It is a matter of time that fungi with the right chemical arsenals are going to present themselves. Statistically, there is a very good chance they are here in Yunnan.”