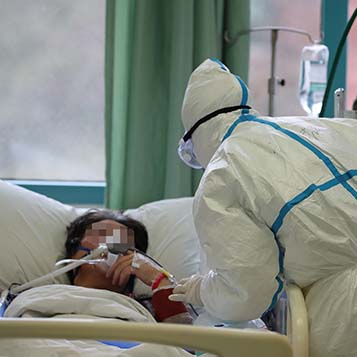 As China ramps up efforts to contain the spread of a deadly new coronavirus, some living just a few hundred kilometers from the epicenter of the outbreak say that a lack of test kits is making it difficult to diagnose new cases in their city.

Yu Yang, who lives in Xiangyang, some 300 kilometers from Wuhan, the epicenter of the outbreak, told Sixth Tone that a shortage of proper medical equipment at local hospitals could hinder the containment of the virus, which had killed 26 people and infected 865 on the Chinese mainland as of noon Friday.

Yu, who asked to be identified with a pseudonym, said he noticed the problem when he visited the city’s largest hospital with his wife after she showed symptoms of an infection.

“It’s extremely worrying,” Yu said. “Dozens of patients were (in the hospital) with high fevers and kept coughing. Most of them had returned from Wuhan and were crowded in the doctor’s office.”

“The doctor simply wore two masks, with no other protective gear. Most of the patients and their relatives weren’t even wearing masks. There are no quarantine measures for suspected cases.”

When reached by Sixth Tone on Friday, staff at Xiangyang’s disease control and prevention office said it was “inconvenient” to disclose information about the availability of diagnostic kits.

Yu and his wife returned to Xiangyang, their hometown, from Beijing on Monday and went straight to Xiangyang Central Hospital, as Yu’s wife had been feeling feverish the day before their journey. A routine blood test and CT scan showed that she had a viral infection, but Yu said the hospital couldn’t confirm whether it was the new coronavirus due to a lack of test kits.

“There was no way to confirm if she was positive for the novel coronavirus,” Yu said. “She was told to go home and stay vigilant — if her condition worsened, she should be sent to the hospital immediately.”

In an unprecedented move Thursday, eight cities in Hubei province including Wuhan were put on lockdown, with all public transport cut off in a bid to contain the virus. However, no such restrictions were imposed in Xiangyang.

As a city of just over 6 million inhabitants, Xiangyang sees many of its young people migrate to its larger neighbor, Wuhan, for work. Yu said many of these young workers returned to their hometowns a week or two before the Lunar New Year holidays, and so he feared the number of infections could jump in the coming days.

“In the room with IV drips, you could see people coughing everywhere — very few of them were wearing masks, many were spitting into trash bins, and others were eating right beside them,” the 37-year-old said.

Yu is also concerned about the safety of hospital staff due to the shortage of face masks. At least 15 medical workers in Wuhan who came into contact with coronavirus patients have been infected, with one in critical condition.

To cope with the crisis, Hubei provincial authorities have sought help from the central government, requesting 40 million face masks, 5 million protective suits, and 5,000 infrared thermometers. Hubei will only be able to produce 8 million masks for medical purposes and 2 million protective suits by the end of January, provincial authorities said — a far cry from meeting the needs of patients and staff as more are quarantined.

Three Shanghai-based manufacturers of novel coronavirus test kits told domestic media that they’ve been operating around the clock to meet the increasing demand. However, one manufacturer said that some of their raw materials suppliers are closed for the Lunar New Year holiday, posing further challenges for domestic containment efforts.

(Header image: A doctor checks a patient at a hospital in Wuhan, Hubei province, Jan. 23, 2020. From @武汉中心医院 on Weibo)