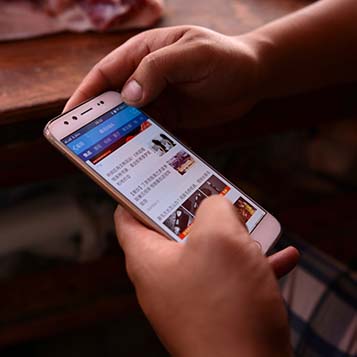 On Aug. 31, a 26-year-old pregnant woman named Ma Rongrong jumped to her death from the fifth floor of a hospital in Yulin, a city in northwestern China’s Shaanxi province. When the hospital announced the news of her suicide a few days later, the incident sparked a huge public outcry on the Chinese internet, particularly among Weibo’s vast community of microbloggers.

In the days that followed, conflicting narratives about what truly happened appeared on Chinese social media. The woman’s relatives claimed that the hospital rejected Ma’s request for a cesarean section and that a despairing Ma responded by killing herself. Three days after its initial announcement, the hospital declared that both Ma and her family had refused the cesarean section, and that Ma had killed herself due to unbearable pain. As news stories flipped from one perspective to another, so too did public opinion flip back and forth — from blaming the hospital for the death to blaming the family.

“Flipped news,” or fanzhuan xinwen, is an approach to publishing ongoing news stories. Media outlets typically run an initial piece containing a limited amount of information about the event and then continually publish updates to the story. Flipped news is different from traditional forms of breaking news because it is not limited to the bare facts of an incident; instead, it encompasses “raw” forms of human experience, like eyewitness accounts and subjective claims from bystanders.

Flipped news is therefore very dramatic; claims and counterclaims flow into the story in real time and compete with one another. This often “flips” the original information, as well as the public sentiment surrounding it.

The emergence of flipped news is tied to China’s media environment. Public distrust of journalists also runs fairly high, due to high-profile cases wherein writers have published unverified or even fabricated information. The failure of Chinese journalism to convince the public that truth is achievable has created a space now exploited by organizations that publish flipped news.

Flipped news in China has been shifting public sentiment for several years. In May 2015, news of a male driver’s brutal attack on a female driver in Chengdu, southwestern China’s Sichuan province, followed the same trajectory. At first, the public accused the male driver of attacking the woman and expressed sympathy toward the latter. Later, however, footage from the man’s dashboard camera showed that the woman had swerved in front of him at high speed. Most of the public then stopped blaming the man for his actions and stemmed the tide of empathy toward the woman. Even more injuriously, many internet users praised the man for the attack, believing the woman should learn a painful lesson from her bad driving.

The growth of flipped news comes down to how technology has changed news production. One fundamental shift lies in the boom of speed-driven journalism, which has given rise to quicker, shorter, and shallower updates on newsworthy events. Thanks to mobile news applications such as QQ and NetEase, Chinese people can stay constantly in the know about current events.

Against this backdrop, it is not surprising to see the emergence of an online ecosystem that thrives on instant updates and partial facts, even if it comes at the expense of accuracy. When flipped news outlets are at their least reliable — or, alternatively, at their most effective — they release a sensational breaking news story without rigorous fact-checking, then publish several separate updates to the story further down the line, without linking them all into a coherent narrative. The information in each article may be contradictory, but it doesn’t matter; few readers are there to hold journalists accountable.

Speed-driven journalism goes hand in hand with so-called clickbait journalism, in which headlines and articles are crafted with the expressed goal of generating as many page views as possible to boost subscription and advertisement revenue. In China, ever-increasing competition from internet celebrities, WeChat social media app public accounts, and news aggregators has put pressure on more traditionally minded journalists and news organizations. To survive in an ecosystem suffering from an information surplus and fierce competition, China’s content providers are tantalizing their readers with sensational titles, exaggerated statements, and skewed facts. On the other hand, more serious, substantive, and in-depth news reporting and analysis takes more time and effort, arrives too late on the scene, and speaks with an authority that clickbait media cannot match.

One profound change in the global news industry is the transformation of once-passive audiences into active distributors and producers of news. Journalists and other traditional information providers no longer remain central to unfolding news stories on the internet. These days, members of the public wield the power to crowdsource eyewitness accounts and shape emotional expression in reaction to an incident. But this plethora of user-generated content often consists of unverified hearsay.

Flipped news reflects intense public anxiety in contemporary China. This anxiety focuses on a wide array of public issues and social trends, such as eroding trust in public and private institutions, deep-seated resentment of the rich, and rife misogyny. Flipped news about the death of Ma Rongrong became a public outlet for criticizing the hospital staff’s professionalism, the lack of accountability in government, and the low status of daughters-in-law in the Chinese family unit. The same goes for the Chengdu incident, which mirrored the conflict between growing public awareness of gender equality and the long-standing misogyny toward female drivers.

Flipped news has become such a major part of life in China that nowadays, readers anticipate the flip even before it happens. This motivates readers to engage in muckraking, conspiracy theories, and so-called human flesh search engines — such as in the case of Luo Er, who solicited millions of yuan in public donations to treat his daughter’s leukemia. Immediately, net users expressed doubt about Luo’s need for money and revealed his financial details online to substantiate their claims.

While flipped news can deepen public awareness of social issues, we should remain cognizant of its downsides. First, strong public sentiment easily transforms into cyberbullying and other harmful behavior. Second, the rapid circulation of unverified information allows rumors and fake news to proliferate. Third, flipped news endangers the credibility of journalism, especially when media outlets chase clicks at the expense of the truth. Lastly, flipped news amplifies public anxiety and mistrust — a self-inflicted wound that allows more flipped news to fester.